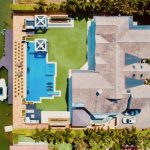 Business Insider: The top 10 Golden Visas the ultrawealthy are scrambling to get ahead of the holidays

Countries such as Austria and Montenegro are still popular for those looking for Golden Visas, according to Astons, an investment immigration and relocation provider. They’re expensive: The minimum to secure a “citizenship by investment” in Austria can cost over£2 million ($3 million). Montenegro is relatively affordable, with a minimum investment that costs just over £300,00 ($400,000.).

Apex Capital Partners founder Nuri Katz told Business Insider that the newly weakened passport has led many ultrawealthy to question its longevity, with some asking: “A year from now, will the American passport be enough to get me to where I want to go?”

In August, The New York Times deemed having a second passport as the new “status symbol.” Business Insider’s Graham Rapier reported that London-based passport broker Henley & Partners saw a 42% increase in overall citizenship applications this year, while Katz estimated to CNN that about  5,000 used investment programs in 2017 to acquire citizenship. This year, he estimates about 25,000.

“Kenya has seen tremendous growth in enquiries of 116 percent between mid-November 2019 and the same period in 2020, while India saw growth of 61 percent, off an already high base in the same period, and Nigeria saw 30 percent growth, also off an impressive starting point,” said Juerg Steffen, the Henley & Partners CEO.

Micha Emmett, the CS Global Partners chief executive officer, said that the Caribbean offers a luxurious lifestyle combined with accessibility which appeals to many Kenyan entrepreneurs and those wanting a better life for their families.

“What perhaps used to be seen as an unconventional avenue to obtain a second passport is now highly sought after,” Ms Emmett said in a statement.

JamesEdition: Second passport as the newest trophy – the 5 destinations for 2021

Armand Tannous of Astons contributes a piece on citizenship by investment in luxury goods marketplace JamesEdition.

Bloomberg recently called a second passport “the newest asset of a mega-rich U.S. citizen”, along with a Gulfstream jet or a Manhattan penthouse.

Given the global crisis and entry restrictions imposed by many countries, US citizens have found themselves in a peculiar position – probably, for the first time in history. Holding one of the world’s most powerful passports but not being allowed to travel freely, affluent individuals are looking to maintain their quality of life and obtain a second passport or residence permit that would provide greater flexibility.

The rush for golden visas among rich Nigerians started before October’s SARS protests. At London-based Henley & Partners, one of the world’s largest citizenship advisory firms, applications by Nigerians increased by 185 percent during the eight months to September 2020, making them the second-largest nationality to apply for such schemes after Indians.

More than 1,000 Nigerians have enquired about the citizenship of another country through Henley & Partners this year alone, which Paddy Blewer, head of marketing, says “is unheard of. We’ve never had this many people contacting us”.

The Six Senses La Sagesse is being constructed by Range Developments, whose founder and managing director, Mohammed Asaria, says it is not unusual for investors never to visit. In fact, since there is no obligation for citizenship investors to visit Grenada, interest in the scheme has ballooned among Nigerians.

“We have between high single figures and low double-digit sales of hotel units on a monthly basis to Nigerians. The average investment is just under $300,000,” says Asaria. “It’s a big market for us. And it’s going to get bigger. There are 300 million people [in Nigeria].” Of these, more than 40,000 are millionaires and, therefore, potential customers for golden visas, according to the Knight Frank Wealth Report.

It is a similar story across the Caribbean. Arton Capital, a citizenship advisory group, says demand from Nigerian families for Antigua and Barbuda citizenship is up 15 percent this year compared with the last.

St Lucia has also seen a record number of Nigerians applying in 2020. “It’s more than it’s ever been over the past four years,” says Nestor Alfred, CEO of the St Lucia Citizenship-by-Investment Unit.

“Businesses are struggling, inflation on the rise, insecurity, and a host of other issues. These issues have prompted an increase in citizenship or residency-by-investment from wealthy Nigerians in a bid to secure a better future for their families in developed countries,” says Evans Ahanaonu, a Lagos-based representative for High Net Worth Immigration, a citizenship advisory firm. Grenada and Turkey are popular for clients wanting quick access to Europe, he adds, while some go straight for the UK Innovator Visa which means setting up a business in the UK.

WealthManagement.com: Twenty-Five Passports HNW Clients Are Hoping to Find Under the Tree

“2020 has been an incredibly busy year for the residency and citizenship by investment sector and we’ve seen some significant uplifts in demand across a number of programs for a variety of reasons,” said Arthur Sarkisian, managing director of Astons. “Affordability and speed have always been a driving factor. However, with the pandemic bringing both economic uncertainty and restrictions around travel, we’ve seen investors opt for more remote and idyllic destinations such as the Caribbean and Vanuatu where they might not have otherwise.”

“When the pandemic started, those with strong passports had the option to move their families to a stable country with reliable healthcare and feel safe under governments that make sensible decisions. For those who hold less desired passports, this pandemic has accelerated the urgency to obtain a second nationality, a passport that allows them to travel outside their countries when they need to do so, without having to plan ahead and worry about visa complications,” said Veronica Cotdemiey, CEO of Citizenship Invest.

“In the first quarter of the year 2020, when the pandemic started, people were uncertain and there was a sense of unease through all aspects of life. Decisions were put on hold, things were unclear. However, a few months down the line, expats from the GCC and citizens from the MENA region started considering dual passports by seeking countries with secure social services, healthcare and quality education,” Rasha Seikaly, Bluemina’s marketing director.

Business Daily: Why Kenyans are rushing for expensive investment visas

“The number of inquiries we have had from Kenya have tripled compared to 2011 when the option of dual citizenship came into play,” says Micha-Rose Emmett, chief executive officer of CS Global Partners, a marketing and legal advisory agency specialising in foreign direct investment (FDI).

In his last visit to the country in July last year, Atlantic American managing director Daniel Ryan told the Business Daily that they had signed up more than 20 high-net worth Kenyans to the programme in just seven months, while 20 others were in the process of filling in paperwork and getting vetted for suitability to the programme.

“It takes about six months for people to get ready to invest, given that most of them do not have the $500,000 instantly at hand,” Mr Ryan told the Business Daily.

The US is facing potentially record-breaking expatriation numbers, along with an even larger number of citizens looking to acquire second citizenship.

Global tax and immigration lawyers are already contending with increased demand. Apex Capital, which specializes in citizenship by investment (CIP) programs, said it has seen interest increase more than 600% since the election, compared to 2019.

And agencies that cater to Golden Visas — where people can acquire citizenship or residency by investing a certain amount into that country — are also feeling the crunch.

“North America just blew up in terms of demand,” Konstantin Kaminskiy, an associate director at Astons, an investment immigration and relocation provider, told Business Insider. “We used to have maybe a couple of dozen Americans investors applying for European residencies or UK residencies per year. Now we have 20 to 30 inquiries per day.”

International tax and immigration advisor and lawyer David Lesperance previously told Business Insider that he’d heard similar reasoning from clients with marginalized racial, religious, and sexual identities. The ultrawealthy who are considering fleeing are worried about the implications of social and civic unrest.