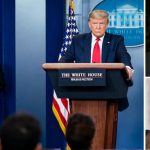 Late Monday night in Washington, Trump spurred headlines by announcing via Twitter that he would temporarily suspend immigration to the US by executive order, without providing further information.

The President said he expected to sign the executive order on Wednesday (today), and that is was still “being written”. The temporary provision, he clarified, would apply only to those seeking green cards and would last for 60 days, rather than the 120 days many had speculated, although he also indicated he would review the executive order toward the end of the period to determine whether or not to extend it.

“By pausing immigration, we’ll help put unemployed Americans first in line for jobs as America reopens,” said Trump, according to CNN. “It would be wrong and unjust for Americans laid off by the virus to be replaced with new immigrant labor flown in from abroad. We must first take care of the American workers.”

Further details on who is exempted from the moratorium might emerge “tonight or tomorrow”, said the president.

When news first emerged on the immigration ban early on Tuesday in Europe (before Tuesday night’s clarifications), we reached out to US Immigration professionals specializing in the EB-5 and E2 visas to get their assessments as to how those categories might be affected.

“While the Executive Order, which I have not read yet, appears as a negative it is in fact a non-event, except with respect to how it could be perceived,” commented Bob Kraft, president of IIUSA, the leading EB-5 industry advocacy group.

“The US has closed entry into the US as part of its efforts to deal with COVID-19 and it will not reopen until the Government has a handle on the virus.  Government offices have ground to a halt under the stay at home order, so the processing of visas has ground to a halt.”

The Executive Order, in other words, would not make a big difference in practice, as processing was already mostly on hold anyway.

“The good news is that countries around the world, including the US, are beginning to contemplate reopening their economies. Hopefully, we will all get back to normal sooner rather than later,” Kraft added and encouraged those with plans to immigrate to the US to follow through with their filings during the period so as to be ready to proceed once bureaus reopen.

“This is in line with other actions taken by the US Government to protect its citizens in a period of unprecedented challenge. This too will pass,” Kraft concluded.

Angie Rupert, from Rupert Law, who specializes in the E2 visa, pointed to the obstacles historically put in place when Trump has attempted to implement broad immigration pauses in the past, emphasizing that such attempts were held up in the courts of appeals for “months and months”.

“US law typically dissuades from general and sweeping executive orders,” she noted. “They must be ‘narrowly tailored’. Orders that aren’t narrowly tailored may be struck down. The tweet seems to indicate that [the purpose of] this order would be to help Americans get jobs. EB-5 and E2 investors create jobs, so if I had to venture a guess, I’d say this is a good sign for them.”

Pointing out that statements from the White House indicating the EO would encompass green cards and work visas (since confirmed), Rupert said investor visas (like EB-5 and E2) don’t fit into those categories.

The E2 visa, unlike the EB-5, is a non-immigrant visa in that it does not lead to a permanent residence permit (green card), and should, therefore, be exempt from the EO. While EB-5 investors do eventually obtain green cards (presuming they maintain their investment), they are not eligible for the permanent status until their I-829 filing has been approved and conditions on their initial visa have been removed, which does not take place until at least two years following their EB-5 investment in any case.

In brief, unless the executive order is extended for several years, the immigration ban will have no tangible impact E2 applicants nor on those applying for EB-5 visas today, although it may delay the removal of conditions for those currently awaiting adjudication of their I-829s.