Visa-Freedom Has Causal Effect on Democracy Score, But Not on GDP, Researchers Find 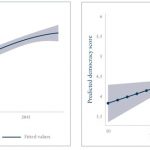 Using retrogression analysis, PhD candidates in Political Science Ömer Zarpli and Uğur Altundal of, respectively, the University of Pittsburgh and Syracuse University have measured the effect of visa-freedom scores on democracy scores and GDP. Their findings point to a causal link – not just a correlation – between visa-freedom and democracy scores as measured by the Polity data series, but no significant effect on GDP.

“What is the effect of visa liberalization on economy and politics?” asked the researchers in an article about their study. “It is estimated that the spread of ‘open door’ policies could potentially contribute to the global economy by generating USD 206 billion in additional tourism revenue and creating as many as 5.1 million jobs.”

The existing body of research, explained the authors, had only examined visa-freedom effects on GDP for one or two individual countries, rather than globally, and no studies at all had explored the relationship mobility has on democracy.

Zarpli and Altundal drew on the Henley & Partners Passport Index – the oldest, and therefore richest in historical data, of a growing field of visa-freedom indices – to obtain mobility scores; on the World Bank for economic indicators and; on the Polity data series for democracy scores on a scale of 10 (autocracy) to +10 (democracy).

“Based on our preliminary analysis, we found that the number of visa-free destinations held by a sender country has a positive and statistically significant, albeit non-linear, effect on that country’s democracy score,” observed the PhD candidates.

Anticipating any “correlation does not equal causation”-objections, Zarpli and Altundal point out that “by minimizing the risk of reverse causality, we were able to rule out the possibility that higher levels of democracy are the cause of high levels of travel freedom, as might generally be assumed. Indeed, when we tested whether countries’ visa-free scores were affected by changes in their democracy scores, we found no significant relationship, which suggested that the causal arrow points from visa-free travel to democracy, rather than the other way around.”

Contrary to the hypothesis, however, the analysis did not reveal any significant effect on GDP from increased mobility scores.

Keeping other variables constant, they found that raising visa-free destinations from 0 to 150 increased a country’s democracy score from about 3 to 5. Beyond 150, however, Zarpli and Altundal did not detect any positive effects on democracy scores.

As explanations of the findings, the authors proposed the notions of absorption of democratic values through cross-border interactions, the prejudice-reducing effects of inter-group contact, facilitated academic and scientific research, and increased international cooperation between civil society groups and NGOs that promote democracy.

The post Visa-Freedom Has Causal Effect on Democracy Score, But Not on GDP, Researchers Find appeared first on Investment Migration Insider.