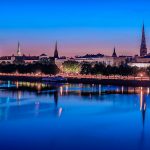 148 main applicants and 368 of their family members received residence permits in Latvia on the basis of investments in 2019, a moderate improvement (19%) on 2018.

While 57% of investors chose to invest in property and 43% in company formations (none chose the bank deposit option), real estate investments accounted for an estimated 91% of the capital raised by the program. The disparity is due to the considerable difference in required investment amounts under the two options; EUR 400,000 for real estate and EUR 50,000 for company formation.

Golden visa applicants altogether invested an estimated EUR 37 million in 2019, up from EUR 34 million during the preceding year.

When figures for the first half of 2019 were released some six months ago, we highlighted the curiously sudden Vietnamese love affair with Latvia:

The revival’s improbable protagonists, the Vietnamese, appear to have taken a shine to Latvia, or at least to its golden visa program. In its first-half 2019 report, the country’s Office of Citizenship and Migration Affairs revealed that no less than 37% of approved investors so far this year came from Vietnam. That’s up from 0% two years ago.

Full-year data released this week indicate this is no mere dalliance but, rather, an enduring endearment; the Vietnamese sustained their high proportion of overall applications also during the second half of the year, ending up with 33% of the aggregate. Only Russians accounted for more applicants, with 50% of the total.

Vietnam’s predilection for the Baltic state appears less of a mystery when viewed in light of their investment option preferences; 98% of Vietnamese applicants invested under the lower-priced company formation option. Their average family size is also a relatively high 3.8, much larger than those of Russians, Chinese, and Ukrainians, the other principal investor groups. If your chief objective is an EU residence permit for you and your family, few avenues are as affordable as the Latvian business investment option.

Want to know more about the Latvian golden visa? To see recent articles, statistics, official links, and more, please visit its Program Page. To see which firms can assist with applications to the program, visit the Residence & Citizenship by Investment Company Directory.