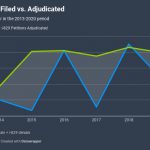 The United States Citizenship and Immigration Services (USCIS) recently released the latest quarterly statistics for Form I-829 (Petition by Entrepreneur to Remove Conditions). IIUSA has made a comprehensive review of the new statistics and published this data analysis, highlighting key adjudication trends of the final step of the EB-5 investment immigration process.

What is Form I-829?
Form I-829 is a petition that must be filed by an EB-5 investor “within the 90 days preceding the second anniversary” of the date when an immigrant investor received his/her conditional green card. It’s viewed as the final step of the EB-5 immigration process because an I-829 petition provides evidence to USCIS that an EB-5 investor has met all requirements of the EB-5 Program (such as job creation). Once an I-829 petition is approved by USCIS, the EB-5 investor will receive a permanent green card along with his/her qualified family members.

What the data tell us

The number of I-829 filings and average approval rates are two important indicators for EB-5 investors. Since an I-829 petition is the final step of the EB-5 investment immigration process, the continued growth in I-829 filings and the high approval rates for I-829 petitions indicate that more and more EB-5 investors were able to successfully obtain their legal permanent residency in the U.S. because they have successfully met all requirements of the EB-5 program.

The post US EB-5 Update: I-829 Petitions Up 27% on Year in Q1, Approval Rate 99% appeared first on Investment Migration Insider.