Up 80%: Approvals for Spain’s Residence by Investment Program Hit All-Time High in H1 2019 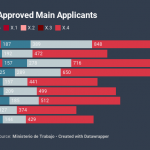 In its latest statistical release on foreign residents in Spain, the Ministry of Employment, Migration, and Social Security reveals that approvals for the country’s residence by investment program (colloq.: Golden Visa) reached unprecedented levels in the first half of 2019.

The number of investment-based residence permits in Spain held by main applicants grew by 848 during the first six months of the year, the highest figure ever recorded by a margin of 18.4% (the last record, of 716, was set during H1 2018) and represented an astonishing 80% increase on the preceding six months (472 main applicants).

As is the custom in Spain, Chinese (272 investors) and Russians (187) led the pack, while the “other” category more than doubled in size to 389. The record numbers make Spain’s golden visa Europe’s second most popular such program in H1 2019, surpassed only by Greece, which approved 1,266 investors during the period.

On a cumulative basis, 4,941 investors currently hold a valid investment-based residence permit in the country. Presuming average investments of only the bare minimum (EUR 500,000), Spain will have raised FDI to the tune of EUR 424 million during the first half of the year, and about EUR 2.5 billion since inception.

Want to know more about the Spanish golden visa? To see recent articles, statistics, official links, and more, visit its Program Page. To see which companies can assist with applications to the program, explore the Residence & Citizenship by Investment Company Directory.

But program participants rarely invest the minimum and, in Spain, not all investors choose to acquire real estate (there is also a reasonably popular EUR 1 million capital transfer option). The actual FDI figure, therefore, is likely closer to EUR 3 billion. While no mean sum, the investment in Spain’s program still lags far behind its Iberian rivals.