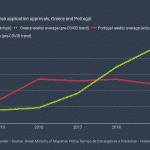 While approvals for Portugal’s golden visa are already back on track for a statistically normal year, those of Greece have halted.

Once more, the statistics coming this month from the Ministry of Migration Policy via Enterprise Greece appear retroactively adjusted; the number of main applicants approved in 2019 was reported two months ago as 3,339 but has now changed to 3,428.

Even more curiously, in the previous statistical release (from July 6th), main applicants approved in 2020 reportedly numbered 376, a number that has since fallen to 368. That would imply that more residence permits went out of circulation than were acquired in the two months since the last numbers update.

Whatever the reason for the adjustment, it paints a grim picture of the Greek golden visa market, which local service providers had expected to pick up in Q3 thanks to a series of rationalization measures introduced at the beginning of Q2. Since its stewardship of the program (and the country) began some 14 months ago, the Mitostakis administration has received praise from golden visa stakeholders for the sincerity and alacrity with which it has cut red tape to facilitate FDI in Greece. By allowing application by proxy, document submission by courier, and a host of other measures aimed at reducing the friction capital meets on its way into the country, the government said it hoped to “jump-start the program”.

The mountains are high and the emperor far away
Earnest attempts at de-bureaucratization emanating from Athens are one thing; the compliance with such decrees from the Immigration Bureau civil servants, who work under the auspices of the Decentralized Authorities, quite another.

“We all know what ‘working from home’ means to Greek bureaucrats,” responded Panos Rozakis, head of Prime Synergy Greek Residency, when questioned earlier this month as to why application processing appeared to have stalled. While wait-times had averaged 5-6 months prior to the pandemic, they are now “considerably longer,” he lamented.

Though bureaucratic inertia may well be to blame, it alone cannot explain the decline, particularly in light of the very different trajectory approval volume has taken for the Portuguese Golden Visa, which – after five years alone at the top in Europe – had been playing second-fiddle to Greece for the last two years. Approval volume for the Greek program have fallen from an average of 46.4 applications a week last year to just 10.5 in 2020. In Portugal, meanwhile, approval volumes have barely veered off-trend, thanks in large part to a veritable avalanche of approvals in April and May.

Though it is hypothetically possible that the functionaries of Portugal’s SEF are four times more efficient than their Hellenic peers, the more likely explanation is structural.

Too close to the sun?
Going into the pandemic, the Greek program was at the tail-end of a historically unparalled bull-run. Between 2014 and 2019, applications rose at a compound annual growth rate (CAGR) of an astonishing 45%, which is to say that application volumes, effectively, doubled every two years. The meteoric rise appearing unstoppable.

Had it remained on that trajectory, it would have issued more than 3,200 applications by the end of August 2020, raising a minimum of EUR 806 million in the process.

Instead, it has barely raised one-tenth of that. The implication is that, very conservatively estimated (most applicants invest more than the EUR 250,000 minimum amount), the pandemic has so far cost the Greek golden visa program about EUR 700 billion. Bouncing back will take a Herculean effort. 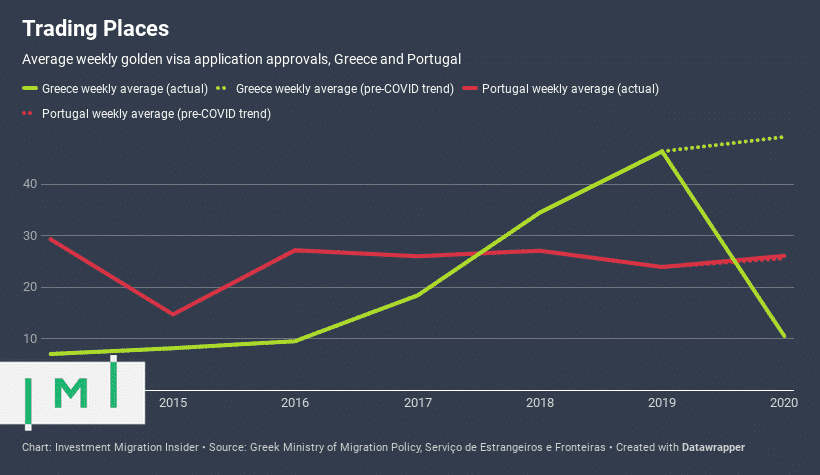 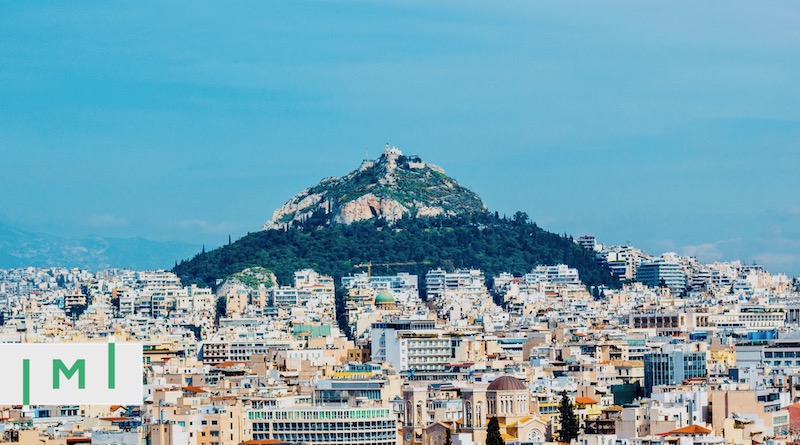 Property Owners Fret Over Inability to Visit New Homes in Greece and Get Their Golden Visas
Many bought qualifying homes in 2019 and were awaiting approvals. Now, they’re out EUR 250,000 and unable to enter Greece. 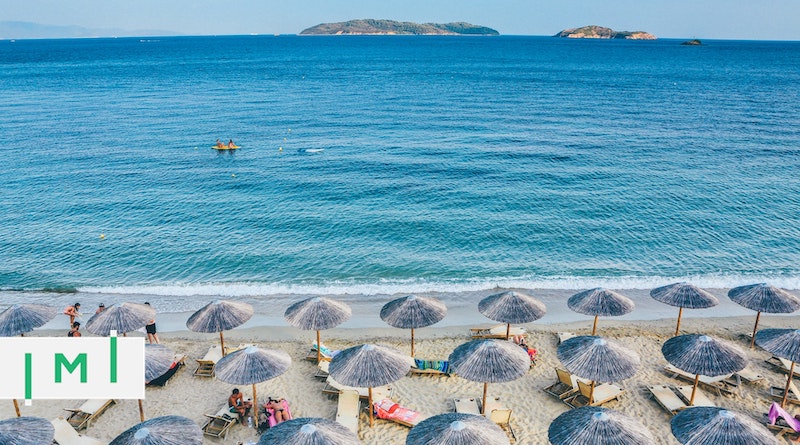 The post The Portuguese Golden Visa Market Has Bounced Back – The Greek One Has Not appeared first on Investment Migration Insider.