The 12 Biggest Investment Migration Markets in 2023 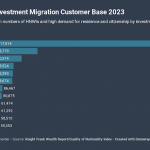 Where will investor migrants come from in 2023? We’ve attempted to answer that question by analyzing push- and pull-factors, supply and demand, and demographic patterns.

To find out where the demand for residence and citizenship by investment will be the strongest in the near future, two metrics about a market are essential.

Why are we not looking first at the number of people living in a country? Population numbers clearly matter because they indicate the size of the pool of potential applicants. But size of population isn’t indicative enough as a measure because the number of citizens of a given country that are interested in becoming an investor migrant is irrelevant if hardly any of those people can afford it.

Uganda, for example, has a population eight times larger than Singapore, but Singapore has 108 times as many HNWIs as Uganda. Neither country, of course, are particularly interesting investment migration markets; Ugandans would love to participate in RCBI programs, but can’t afford it; Singaporeans can afford it, but have little need for it.

In determining markets of interest for the RCBI-industry, we are not chiefly interested in a country’s overall population; rather, what matters is the HNWI-population.

Because of differences among countries in the Gini-coefficient, the number of HNWIs in a country doesn’t correlate directly with population size or GDP. Two countries with similar levels of population and GDP per capita may still have very different numbers of HNWIs.

For instance, Saudi Arabia and Canada have roughly the same GDP per capita in PPP terms (some US$53,000 and US$49,000, respectively) and roughly the same population size (33 and 37 million, respectively). In a world without differences in income distribution among countries, Saudi Arabia and Canada would have more or less the same number of ultra-high net worth individuals (UHNWIs, those with a net worth of more than US$30 million) but, in reality, Canada has about five times as many UHNWIs as Saudi-Arabia because wealth is more concentrated in the latter.

The United States is the world’s third most populated and has the most HNWIs and UHNWIs in the world, but it will not be among the top markets for investment migration in the foreseeable future simply because the quality of their nationality is too high.

The US generally scores highly on measures of quality of life, travel freedom, peace stability, and so on, which means that most of their HNWI have little interest in or need for second citizenships or residence permits.

To find out which countries’ citizens do have an interest in investment migration, therefore, we must factor in the quality of their current nationality. For that, we’ll rely on the only comprehensive measure available for this purpose, the Quality of Nationality Index (QNI), developed by Dr. Dimitry Kochenov and Henley & Partners.

The QNI scores countries on quantifiable measures including

Countries with an extremely high (dark blue), and very high (light blue) score on the QNI have plenty of people who could afford RCBI-programs but who have very little demand for them. These include countries in the EU, North America, Australia, Japan, etc.

Conversely, countries that score very low on the QNI have plenty of demand for RCBI-programs but not many people who can afford them. These include countries like Somalia, Pakistan, Yemen, Sudan, Syria, etc.

Dr. Kochenov has said about the QNI that it’s very helpful in predicting industry trends because mapping out where future demand will come from, all that’s needed is a look at the colors assigned to each country.

“The customers will not come from the blue nationalities, and also not from the lilac and lower orange ones, but overwhelmingly from the upper orange and green,” Kochenov told IMI in an interview last year. (See: The Passport Professor – An Investment Migration Insider Exclusive Interview)

A quick glance at the map illustrates his point; China, Russia, and most Middle Eastern countries – that is, the current largest markets for investment migration – are all in the upper orange and green categories.

We have only one caveat to using the QNI to predict demand: Some countries score high on their QNI principally because the country has a good passport. While this may dampen demand in these countries for alternative citizenships, it doesn’t necessarily reduce their demand for alternative residence permits, because factors like security, economic prospects, or permanent settlement freedoms come into play.

Brazil, for example, is a country that has relatively little potential for those marketing CIPs, but tremendous prospects for those promoting residence programs.

First, let’s rank countries according to their number of HNWIs in 2023.

According to Knight Frank, these 30 countries will have the highest numbers of HNWIs in 2023.

Next, we’ll eliminate the countries that have an “extremely high” or “very high” QNI score (a score of more than 50), because these are countries that have levels of travel/settlement freedom, human development, peace and stability, and so on, which makes alternative citizenship and residency a less pressing need for its HNWIs.

We will, however, leave in Brazil and Mexico because, although these countries have high scores on the QNI, that is principally due to the disproportionate strength of their mobility scores, which camouflage serious deficiencies in other metrics (security, economy) that strongly bolster demand for alternative residence permits.

That leaves us with the following final tally of top 12 largest investment migration markets in 2023:

First, it’s critical to distinguish between markets that are interesting for CIPs and those for RIPs. Promoters of the Malta IIP or Cyprus CIP, for example, would be ill-advised to focus their strategy in places like Hong Kong, Brazil, and Mexico because, although they have plenty of rich people, their travel freedom is relatively high. What HNWIs from these jurisdictions are in the market for is residence permits, not citizenships.

Second, just because a country has a relatively low number of HNWIs, that doesn’t mean it’s not an interesting market. Big markets may be saturated and small ones undersupplied. It may be true that there are only 1,904 millionaires in Uganda, but if your company is the only choice they have, you can still do plenty of business.

If you want to know the degree to which a particular market is saturated, visit the Residence and Citizenship by Investment Company Directory and filter by office location to see how many results appear.