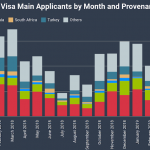 Following disappointing performance in May, Portugal’s Golden Visa approval volume picked up markedly in June, as a total of 118 main applicants – the highest figure in six months – received residence permits.

Leading the charge were investors from China (45, up from 35 in May) and Brazil (24, up from 18). Turks accounted for six golden visas, while Russians and South Africans obtained three each.

Raising €73 million in June alone and €372 during the year to date, the program has now reached total investments of more than €4.6 billion since inception in late 2012, of which nine-tenths has found its way to real estate.

So far in 2019, the SEF has issued golden visa residence permits to 621 main applicants, and 1,059 dependents, which, on an annualized basis, would equate 1,242 visas, a figure considerably below that of the preceding three years.

In the absence of a substantial shift in the trend-line, 2019 will be the worst-performing year since 2015, when corruption scandals and concomitant program reform took a heavy toll on revenue.

Hundreds of companies can assist with applications to the Portuguese Golden Visa. To see which ones, visit the Residence and Citizenship by Investment Company Directory.