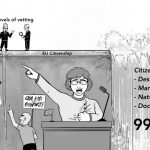 European politicians, Transparency International, Global Witness, the Guardian, and many other outfits ideologically antipathetic to the granting of citizenship or residence permits on the basis of merit have characterized CIPs as a security threat, a money-laundering mechanism, a corruption risk, and a “backdoor to Europe”.

The same institutions and individuals have concluded that such programs need “phasing out” and devoted a great deal of effort, time, and money to that end. Ignoring these programs’ socio-economic benefits, they have authored reports and press articles focusing on imagined bogeymen and a vanishingly minuscule number of instances of (subsequently corrected) missteps on the part of program authorities.

Their campaign is disingenuous, and demonstrably so.

Here’s why: If the true motives for Europe’s detractors of citizenship by investment were the prevention of security breaches, money-laundering, and corruption, they would not focus their energy on the category of immigration that is the least voluminous and, simultaneously, the most closely controlled.

Can you imagine the World Health Organization prioritizing the curing of myasthenia (an extremely rare but treatable illness) over the prevention of heart disease (the cause of 17% of deaths worldwide)? The analogy is imperfect because the presence of CIP citizens, unlike a disease, actually improve the conditions of those countries “afflicted” by them.

Between 2014 and 2017, according to Eurostat, EU countries naturalized more than 3.5 million new citizens. Of these, 5,021 came through CIPs. That’s 0.14% of the total. Incidentally, that’s about the same number of EU citizens who enlisted in the Islamic State army during the same period. I need not, perhaps, mention that none of those jihadists got EU citizenship via CIPs.

Now, I am not saying that just because CIP citizens are a microscopic fraction of EU naturalizees they should be exempt from scrutiny; God (Allah?) knows that 5,000 determined individuals can cause a lot of damage.

But the irony of the EU/Transparency International focus on the CIP “threat” is that, beyond being the smallest category of naturalization, it is also the most closely watched.

When someone naturalizes in an EU country through a CIP, they must undergo a series of stringent vetting procedures. Under the Malta IIP, for example, a “four-tier” process applies:

Which due diligence processes did the other 99.9% go through? Precious few. In most cases – although each member state has its own rules – you’ll need documents like birth certificates and police records, but generally there are no World-Check controls, few Interpol/Europol/State Department/CIA checks, no bank statement/tax record requirements, and certainly no third-party outsourced due diligence, which costs thousands of dollars per applicant.

In an opinion piece last year, I pointed out four reasons why citizenship by investment isn’t a security threat to Europe and is, in fact, the least risky category of immigration:

In a sane world, CIPs would get (at most) 0.14% of the attention. But they get way more than that. The ostensible reason, the (patently absurd) concerns about a “security threat”, is but a smokescreen. Such concerns are logos-based arguments on the surface but are used to disguise a primarily pathos-driven campaign.

See also: While EU Worries About Handful of CIP Investors, Millions Get Non-CIP Citizenship Without Vetting

The real reason, I suspect, is that CIPs, at their core, deal with rich people and the privileges money can buy. Western Europe, along with Latin-America, harbors a fundamental, limbic system-based and politician-encouraged distaste for anything that smacks of inequality. Eastern Europe, China, and Southeast Asia – having witnessed first-hand what happens when you try to impose equality by decree – seem inoculated against that mentality. For the moment.

Commissioner Jourova, the chief anti-CIP campaigner in the EU, has herself conceded that she does not believe in exchanging citizenship for investment. Her opposition to it, then, is rooted not chiefly in security concerns but in ideology; money shouldn’t be able to buy you citizenship. In other words, Jourova made up her mind about CIPs a priori and then looked around for practical arguments – security threats and money laundering – to justify her position.

But money launderers and terrorists don’t use the “backdoor” to Europe. It has metal detectors, sniffing dogs, and iris scanners. They prefer the front door, where security controls are rudimentary and perfunctory.

If you want the investment migration industry to take your concerns about the backdoor at face value, come back when you’ve got something more than a windscreen on the front door.