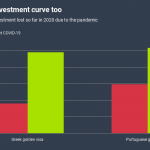 How much money are Europe’s golden visa programs losing due to COVID-19? Looking at weekly average investments in 2020 compared to the pre-COVID trend, we can make a rough estimate.

New data this week from the Greek Ministry of Immigration and Asylum Policy show 136 new golden visa applications have been approved since the first week of April, bringing the aggregate for 2020 so far to 363 main applicants, a figure well below the pre-COVID trend.

The most recent figures for Portugal, meanwhile, which cover the period from the start of the year up until April 30th, showed 259 main applicants were approved in the first four months of 2020. See more details on Portugal’s April figures here.

Both programs, in the absence of COVID-19, would have approved (and received) considerably more applications and, by extension, more investment. But exactly how much has the pandemic cost these programs in terms of applications and investments?

800 missing golden visa approvals
Because the periods for which statistics are available differ somewhat between the programs, we’ve had to adjust for this by looking at per-week averages, both for applications and investment. Portuguese averages are calculated by dividing total figures by 17 weeks; those for Greece, 20 weeks.

To estimate what the programs should have raised weekly in the absence of a pandemic, we’ve extrapolated the overall trends from 2014-2019, periods during which Portugal’s trendline was largely stable while that of Greece had strong upward momentum.

In the graph below, we’ve displayed the actual recorded weekly average applications approved under each program, along with the number of applications they would have approved in 2020 if the trends had continued as normal. The shaded area represents the applications lost to COVID-19.

In the roughly 20 weeks between January 1st and May 22nd, 2020, Greece has recorded a shortfall (relative to the trend) of about 31 applications a week, which translates into 620 applications lost to COVID-19 during the period.

In Portugal, the loss is less pronounced (but remember that Greece’s figures cover the first three weeks of May, while those of Portugal cover only the period up until April 30th), with a shortfall of 10.4 applications per week, or about 176 foregone applications during the period.

Combined, 796 applications that otherwise would have been submitted, never were.

The equivalent of Micronesia’s GDP, gone
To estimate the revenue lost to the pandemic, we’ll do the same exercise but look at investment amounts rather than application volumes.

Last year, Portugal’s golden visa raised an average of EUR 14.3 million a week, according to official investment amount data released monthly by the SEF. This year, according to the trendline, they should have made somewhere close to EUR 15.3 million a week. Instead, Portugal’s average weekly investment so far in 2020 has been about EUR 8.7 million.

For Greece, meanwhile, there are no official statistics on investment amounts, and we have therefore assumed (very conservatively) that each applicant makes an average investment of exactly the minimum amount of EUR 250,000. In reality, this figure is likely well above EUR 300,000, but we have opted to err on the side of prudence.

Combined, the pandemic has bereft the two programs of at least EUR 268 million and, more likely, closer to EUR 300m considering the conservative estimate we’ve applied to Greece. 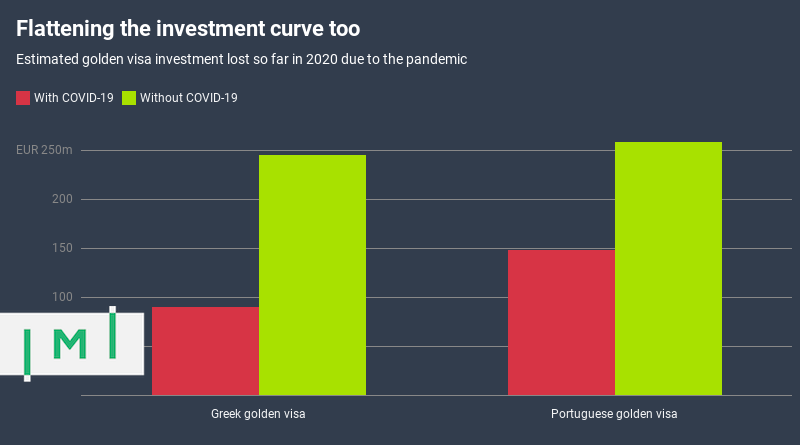 Pandemic Has Robbed Greek and Portuguese Golden Visas of Nearly EUR 300 Million So Far
Greece and Portugal’s golden visa programs have missed out on 800 applications and investment equivalent to a small country’s GDP due to the pandemic. 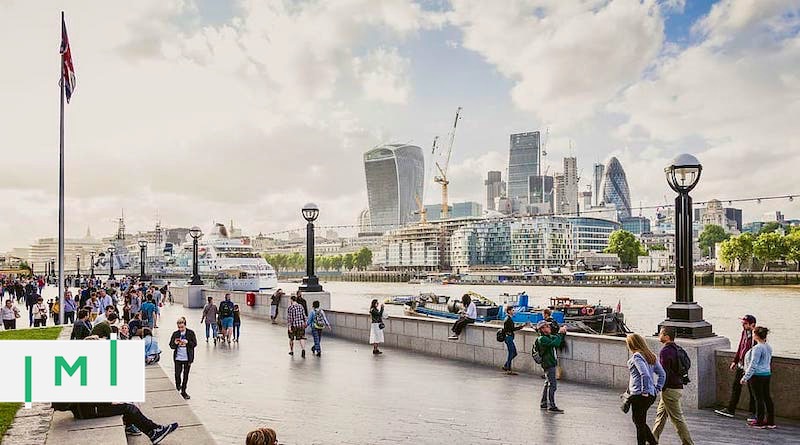 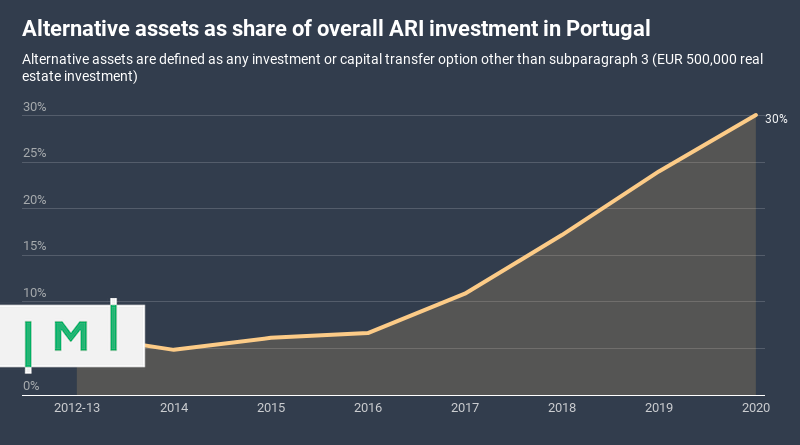