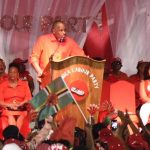 In a somewhat cryptic statement during a campaign rally this week, Prime Minister Skerrit of Dominica claimed the island’s political opposition had agreed to grant a single company an exclusive agency for the country’s citizenship by investment program, according to Caribbean News Now.

Referring to the leader of the opposition – Lennox Linton of the United Workers Party – Skerrit said “his plans to do away with all other CBI agents but one would wreck this economy. He can come and suggest otherwise, but I know they have promised one company an exclusive agency for Dominica’s CBI program.”

Hundreds of companies can assist with applications to the Dominica CIP. See which ones in the Residence & Citizenship by Investment Company Directory.

Motivating the opposition’s plan to grant exclusivity to one particular company was the campaign financing it had been receiving from said company, the Prime Minister indicated, adding that the deal would be “disastrous” for the vulnerable economy.

“It is suicidal. But they had to agree to it, in order to get campaign funding. All these pretty ads you see surfacing were produced and financed by one sponsoring company. You cannot put all your eggs in one basket and expect variety. No single agent can bring you the revenue that is required, on a consistent and reliable basis. Their agreement to give all their CBI business to one company would be disastrous for Dominica.”

Several local agents and hoteliers with whom IMI has been in touch say they have no idea about which firm the Prime Minister is referring to.