OECS: Caribbean CIPs to Get Uniform Legislation and Application Forms 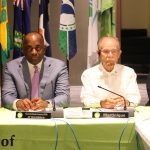 Following the 67th meeting of the Organization of Eastern Caribbean States (OECS) Authority in Antigua this week, Roosevelt Skerrit, Prime Minister of Dominica, informed the press that the organization’s respective heads of state have agreed to implement policies to unify the region’s citizenship by investment programs.

According to Dominica News Online, Skerrit indicated uniform CIP legislation and application forms would be priorities, while the organization also planned to set up an oversight committee that would audit and review the programs, as well as give recommendations for how to enhance them.

The oversight committee, according to a summary on the OECS’ website, would be composed of representatives from the Regional Communications Centre (JRCC), the OECS Commission, and the Eastern Caribbean Central Bank.

Plans to provide AML/CFT training to the staff of the respective CIUs in the region were also underway, revealed Skerrit.

“We want them to be trained and certified. We believe that it is an important component of good governance especially with financial transactions,” said Skerrit, adding that such measures would also help counter some of the criticism levied against Caribbean CIPs in recent years.

Nestor Alfred, head of the Saint Lucia CIU and Chairman of CIPA, the Citizenship by Investment Programme Association, revealed in Geneva earlier this month that plans for a common regulator were afoot, and stressed the need for information sharing between the respective due diligence departments.

“When one island denies an application, that information will be shared with all of the other islands,” said Alfred.