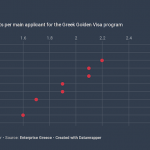 The Greek golden visa program is raising capital to the tune of EUR 15-20 million a week, most of it attributable to Chinese investors.

In Q3, the total number of main applicant residence permits in circulation grew by 621 to 5,302. The figures indicate that growth in approvals in Q3 nearly equaled that of Q1 and Q2 combined. Aggregating main applicants and their family members, the overall number since the program’s inception in 2013 now stands at 15,369 (about two-thirds of whom are family members), up from 12,666 just three months prior.

Enterprise Greece has, as on several occasions in the past, retroactively amended its statistics for years dating back to 2013. We can but bow to official figures, presume that the reasons for revision of data long-since settled are legitimate, and update our own statistics accordingly.

One explanation is that Enterprise Greece may be counting the number of visas in circulation, deducting from the total those visas that expire and are not subsequently renewed. This would explain why certain nationalities are receding in terms of overall number of visa holders and why the growth in total number of visa holders in Q3 is lower than the growth in Chinese visa holders. This method of calculation makes accurate year-by-year comparisons impossible but, since the rate of attrition is low, annual comparisons remain a useful – if imprecise – indicator.

Enterprise Greece has, furthermore, stopped providing statistics for where in the country the investments are registered. We know from previous statistics that some 77% of investment ended up in the Greater Athens metropolitan region.

Want to know more about the Greek Golden Visa? To see recent articles, statistics, official links, and more, visit its Program Page. To see which companies can assist with an application to the program, explore the Residence & Citizenship by Investment Company Directory.

Massively growing interest from the Chinese market appears to be the chief catalyst; the number of residence permits held by Chinese main applicants grew by 697 during the quarter and visa-holders from the country now make up 65% of the cumulative total since 2013, up from 61% three months ago and from less than half of the total this time last year.

Meanwhile, sharp differences in family size are observable across nationalities; while Ukrainians languish at the low end of the spectrum with only 1.2 family members per investor, Iraqis and Syrians stand out with an average of 3 and 2.7, respectively.

Presuming each applicant invested only the minimum EUR 250,000 in real estate, Greece’s program will have raised at least EUR 1.3 billion since inception. The actual number, while incalculable, is certainly higher for two reasons; first, we don’t know how many golden visas expired, but 100% of those who obtained them invested first; second, applicants tend to exceed the minimum investment required when buying a property.

A series of unconfirmed reports surfaced last month to indicate Greece’s new center-right government – its appetite whetted by the fruits of the residence program – is also flirting with the idea of making a foray into the lucrative and less competitive EU citizenship by investment market.