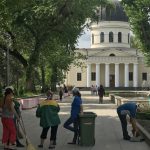 Following the election in February, which resulted in a hung parliament, Moldova’s political factions have been unable to form a government. Three main factions – the Socialists, the Democrats, and the ACUM-bloc (consisting of parties DA and PAS) had been negotiating among themselves to form a government since March 9th, the day the Constitutional Court recognized the election results.

The constitution stipulates that Parliament has “three months” to form a government from the day the election results are confirmed. In the absence of a new government, new elections would be held. The constitutional crisis arose over conflicting interpretations of “three months”; did it mean three calendar months or 90 days?

On Sunday the 9th, the Constitutional Court ruled in favor of the 90-day interpretation. In the convoluted series of events that followed, two separate political factions both claimed to be the legitimate government; one by having a majority of seats in Parliament following a successful election and coalition formation within what they considered the deadline, the other by virtue of being a caretaker government, a right it deemed constitutional because of the other faction’s failure to form a coalition within the deadline (interpreted as 90 days).

Dual claims to government persisted for five more days, until the caretaker government two days ago handed in its resignation in order to “end the political crisis”, allowing the new coalition to formally take office. The caretaker government – chiefly consisting of Democrats – did not, however, change its stance on the unconstitutionality of the new governing coalition, demanding a new round of elections. Meanwhile, the Democratic Party’s leader has reportedly left the country on a private jet destined for Moscow, and the Constitutional Court yesterday reversed its decision on the 90-day interpretation, issuing a statement saying it had been pressured into its original ruling.

The announcement put a definite end to the political stalemate, at least in the short term, and the new government has been recognized by the international community.

As part of the coalition-forming negotiations, the Socialists and ACUM, factions that are by no means ideological allies, needed to agree on a common policy platform. On June 8th, the coalition published a statement outlining the objectives on which it had agreed (at the time).

The statement, which readers may peruse in Romanian here, included agreements on a variety of topics, such as who would be Prime Minister and Speaker of the House, which civil servants would be dismissed, and significant changes to the country’s laws.

What caught the attention of investment migration industry observers, however, was subsection 8 of paragraph 4: “Amendment of the citizenship law in order to annul the provisions on granting citizenship for investment.”

Moldova’s new ruling coalition, in other words, has explicitly stated that it intends to repeal the program.

Moldova insiders with whom IMI has been in touch say it’s too early to tell what consequences the change of government will have for the country’s citizenship by investment program. A long-term agreement is in place with the concessionaire, who, we understand, has footed the bill for the program’s development in exchange for variable compensation on the tail-end.

Can the new government legally get out of that contract? Are they really serious about repealing the program? The questions remain unanswered for the moment.