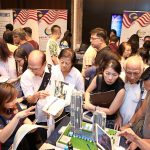 As tensions in Hong Kong show no signs of abating, locals are considering residential options elsewhere. Malaysian property is sailing up as the prime beneficiary of uncertainty about the city’s future.

In July and August last year, 47 Malaysian property exhibitions took place in Hong Kong. During the same two months this year, that number had risen to no fewer than 93.

“Malaysia is proving to be the big winner when it comes to exhibition numbers (crowds and sales, too – according to agents),” says Eli McGeever, VP of International Property at Soho. “42 and 51 exhibitions over the last two months, respectively, is the highest, by a large margin, of any country in a month. That’s about 1.5 Malaysia property exhibitions per day over the last two months – with no signs of slowing.”

Questioned as to whether the demand for Malaysian property in Hong Kong is directly benefiting the My Second Home program or whether it’s about Malaysian real estate in general, McGeever is unequivocal in his response.

“100% of the exhibitions promote MM2H as part of their marketing and sales campaign – it’s a huge drawcard.”

While pointing out that Australia, Thailand, and the UK have been consistently strong performers, McGeever acknowledges that much of Malaysia’s newfound market share has come at Thailand’s expense.

“Thailand’s exhibition numbers have slowed, as more agents switch to Malaysia – there is only so much capacity in the market. A return of Thailand exhibitions will depend partly on Malaysia, due to the crossover of agents also marketing Malaysia property,” explains McGeever, who also highlights the strengthening of the Thai Bhat against the HKD by about 8% in the last year as a factor.

Malaysia is not alone in benefiting from the unrest. Last month, four different investment migration companies confirmed a sharp uptick in inquiries from Hong Kong.

Vincent Fong, Managing Director of Aubella, an MM2H specialist, indicates demand for residence permits in Malaysia is skyrocketing among Hongkongers.

In the first two weeks of August, compared to the same two weeks a year ago, “official Hong Kong government data shows that the number of locals seeking police checks has surged by 48%,” says Juwai.com Executive Chairman Georg Chmiel, who indicates his team is fielding more inquiries about Malaysia from Hong Kong than ever before.

“These ‘good citizenship’ documents certifying that they do not have a criminal record are crucial to enable them to apply for the Malaysia My Second Home Program and other foreign visas,” he adds, holding rising demand for police certificates up as evidence of rising interest in foreign residence permits, of which the MM2H is currently the leader in Hong Kong.

Of course, one factor driving Hong Kong interest in foreign residencies that is even stronger than political unrest is that of sky-high property prices in the city-state.

“The median cost for a house in the state of Johor is RM350,000 (US$84,000). A 300 sq ft apartment in Hong Kong, despite being much smaller than the average flat in Malaysia, would cost six times more,” says Chmiel.

Nonetheless, Hong Kong has had the least affordable housing market in the world for the past nine years running, according to Demographia, and, as such, cannot explain the sudden surge of interest in foreign residence permits this summer. In the last two years, Hong Kong participants have accounted for a relatively stable 5-6% of MM2H applications each year. The one variable that has changed in 2019, however, is the political situation.