Investment Migration People in The News This Week 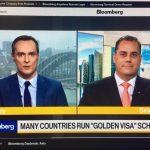 In a new segment, we provide a roundup of industry personalities’ appearances in the large, traditional media over the past week. The BBC, The Times, Bloomberg, and CNN all have all run stories on residence and citizenship by investment in the last several days.

Who made appearances this week? Among others, Christian Kälin, Armand Arton, Philippe May, and Nuri Katz.

Wealthy Hong Kong citizens are increasingly on the hunt for new passports as protests drag on and cast a cloud over the territory’s future.

Arabian Business: Around the world in 13 passports: Why second citizenship is on the rise

Almost a third of respondents to a global online survey revealed they have acquired citizenship of a country other than their country of origin, or plan to do so

BBC: How to Buy Your Own Country

Citizenship is changing; and half the world’s governments are making money through citizenship schemes. We investigate the booming trade in passports, and in a rare interview with the boss of the world’s biggest citizenship brokerage, we hear how easy it can be to get a second – or third – passport, for the right price.

Philippe May, managing director and head of Asia Pacific for Arton Capital, discusses the uptick in wealthy Hong Kong citizens seeking new passports due to the violent protests. He speaks on “Bloomberg Daybreak: Asia.”

CNN: Passports for purchase: Open citizenship doors around the world

Turns out money doesn’t just buy a glamorous vacation in the Caribbean or a killer suite in Quebec — it can buy residency too.

More than 30 Hong Kong millionaires have applied for fast-track residency in Ireland because of the political unrest sweeping the territory, according to Bartra Wealth Advisors.